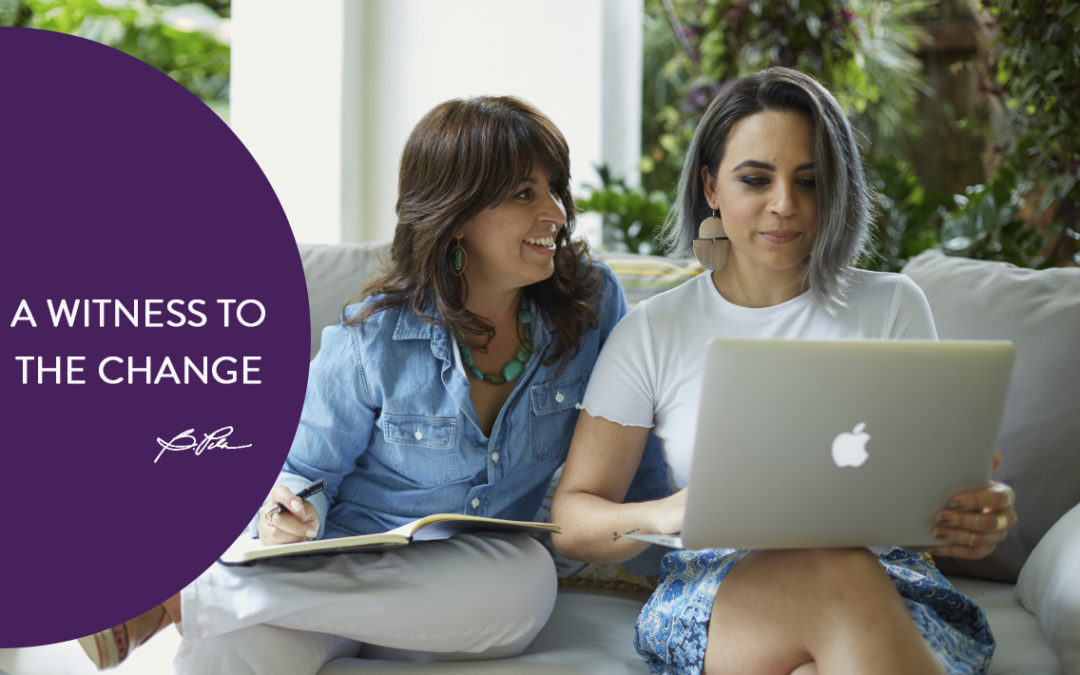 A Witness To The Change

Have you ever wondered when the ’60s ended and the ’70s began? What was THE pivotal moment that marked that change? A change in clothing, a change in attitude, a change in thought? When does a decade become known for a distinct quality anyway? Can we even evaluate when those distinctive characteristics morph into something else? The only way that I can even come close to determining this is with my own life. As I look back at the decades of my own experience, I know for a fact that each one has indelibly marked a transition and change in me and yet I can’t for the life of me begin to recall the precise moment that each shift occurred. And yet I know of its existence and am completely aware of the difference these shifts made.

In the last few months, however, a new awareness and discernment have occurred  I can tell you I have clearly seen that the shift is indeed happening. For the first time, I am fully aware and completely awake during this process in myself, in others and maybe even the world. I am bearing witness to it and I am making a point of writing it down so that at the very least I am able to clearly mark a time on the calendar that confirms what I am feeling, seeing and experiencing during the great unfolding of a new era. Maybe this is truly the Aquarian age coming into being, or maybe its what is being called ascension, but whatever it is, I feel it coming.

Whether aware of it or not, we are all in this process of change and shift right now. As I write these words, I know in the depths of my being that transformation is brewing and we are all participating in it. Those that are receptive to these new ways of existence that Eckhart Tolle calls a New Earth as well as those that are asleep to it. I for one am fully awake and going back to sleep is not really an option anymore.

On average these creative insights for me, have been about a decade ahead of time. As a born “creative” I have always been a bit of a weirdo, speaking a language before anyone understood my visions and voice. I have learned to cope with this throughout my life as a matter of fact and accepted my predicament as a given. Par for the course of my nature as an innovator and bringer of new ideas in the material fold. For the first time, however, I see so clearly the parallel paths stretching out before us as a global community while simultaneously attempting to find our own place in it all. Some of my fellow travelers are still on the path that is compelled to express itself through the ego, with narcissism, celebrity, and status as their main language. While the other side forges a path driven by unity mentality, humanitarianism, and sovereignty.

The master architects of Greece come to mind when they created and built the Acropolis with columns that are designed to merge at some point in perspective in the sky before any computer could tell them where these points would intersect, they knew that this would create the perfect proportions and angle for the viewer. I can’t help but wonder whether these unforeseen future paths will at some point merge making each stronger by their union.

Another inexplicable phenomenon that I am experiencing is a faster pace of living in this unfolding and spreading of ideas. There just doesn’t seem to be enough time to process and absorb it all. I’m sure you will all admit to feeling this way too. Time seems to be speeding up as if we are in some time-lapse experiment. Maybe its how fast our technology can help make an idea go viral, or maybe its how many forms of expansive media we have, but ideas are spreading and they are spreading faster than they ever have before. Ironically,  both paths are running the race of time, like racehorses neck and neck on the track of life.

I admit that almost all of my innovations have somehow been “early” for their time. Too early to be accepted and understood by the social norm. Which is why I have spent most of my life creating and waiting for my ideas to become mainstream, only to discover that when they do, 5 to 10 years later, I’m on to something else and look like an imitator versus an innovator. I’ve been left to console myself in thinking that at least I knew that the truth of the initial spark started within me. This MO has the built-in issue of always feeling just outside synchronicity with the current decade. Just outside the realm of acceptance and therefore the qualifications that can be called a success, or yet alone be credited with the innovation. I imagine that must be how other creators ahead of their time felt, like Leonardo Da Vinci when he sketched the idea of a helicopter centuries before it existed, or how Tesla must have felt when his ideas were so humanitarian. I mean how could anyone imagine that energy could be given away for free? Why that is as crazy as imagining that God could charge us for the Suns’ light. Nuts right?  I admit I have felt a bit nuts myself, but now I know my idea of Design Enlightenment is on time. We are ready for it and ready for the changes the future will bring. We are primed for the experience of it and in fact came here for that very reason, to bear witness to the change.

Yes, I know times are changing, I see it in the subtle little things finding their way into the mainstream, like the fact that the life of Supreme Court Justice, Ruth Bader-Ginsberg pioneering women’s rights in the ’70s is now, Notorious RBG. Who would have guessed that her life could be depicted and a new generation would help its message go viral? I see it in every magazine I open that speaks of authenticity as a core value that has become the guiding light for entrepreneurship. I see it in the Biophilic Design Concepts that are helping us to connect with ourselves and nature in every interior environment created in the Milan Furniture Show in Italy. Our humanity, wellness, and creativity are no longer Woo Woo concepts relegated to the spiritual community but commonplace language that is building momentum and I believe will not only stick but become the norm of our society.

I went to an event the other night honoring my 27-year-old daughter’s work. Her creativity as an artist creating a collection of flower vases that honored a bygone era called Postmodern Memphis Design was simultaneously edgy and current and yet vintage and familiar. I couldn’t help but smile with pride at her innate ability to recognize something great that had passed its heyday but was ready to re-emerge in a new way.  But what really struck me was the atmosphere of the place and the young people that attended the event. They were hip and yet vintage themselves. This younger generation and the shop we were in were like a statement of contradiction, a flash from the past and still speaking of the future. The space was furnished with items from the decades past that I have been admiring and collecting for my entire life. I felt at home and yet taken aback by how long these ideas and creations had waited to be appreciated by this new generation. Items that I have cherished and collections since my teens, such as mid-century rattan and acrylic and velvet flocked tufted sofas were only now getting there deserved reverence. Country music was playing on an old school vinyl record player with an eagerness to capture the bygone days of an analog era. I was torn by a jealous tug in my heart and quietly confessed to my daughter “ I think I was born in the wrong generation, too early to be understood!”. Once again I knew I was getting clear confirmation of my life’s signature issue.

This group of young creatives, so eager to express their authentic selves without reservation made me feel a little envious of the freedom that they have to break with the social norms and convention of any past generations let alone this particular time. They were and are not only accepted but considered ahead of their time. They intuitively know what is of value without pretension.

I see the change and it is coming fast and I’m happy to be wearing the white hat of love, not fear. Although I am aware that there is still a strong momentum on the path of fear I am happy, willing and able to carry the torch on the pathway to love and be part of the change I see.  Love of self and our fellow man. I want to continue to create positive change in the World and raise consciousness as I follow my directive and purpose. Design Enlightenment is my language, MY Love Language and this time I just might be ON time and maybe even understood.

Bea Pila is an award-winning interior designer with 30 years of residential and commercial experience. Bea’s work has been recognized by ASID and the International Design Awards and featured by U.S. News and World report, Houzz, and Elle Décor, among others. She is the pioneer of Design Enlightenment, a process for aligning people’s interior spaces with their interior selves.